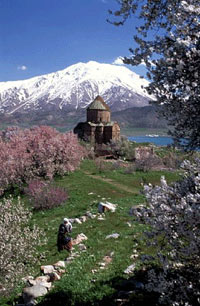 The ruins of the former Armenian medieval capital Ani near Kars experienced a golden age of superb stonemason ship at a time of prospering trade along a main caravan route, so that its status challenged even Constantinople itself. Today’s ruins still manage to show the beauty of these stone churches and frescoes, citadel, caravansary and Selcuk palace, despite attacking Selcuk, Mongol and Georgian rulers.

A majestic line up of colossal stone heads on the summit of Mount Nemrut stand afore their decapitated throne-seated statues behind, ranging from eagles and lions to Zeus and Apollo, they have adorned this temple and tomb of King Antiochus for over 2000 years. The sun rises and sets over the 2 equally decorated sides of the tumulus pyramid at the summit of over 2000 meters and makes a sensational visit at either of these times.

In the Southeast, Van Lake draws many visitors as the largest and most curious salt lake in Turkey, with shores embellished with strange conical rock formations since its creation in a massive volcanic eruption. The nearby old city of Van was former home to ancient kingdoms and has fascinating Urartian tombs in beautiful Urartian script, as well as a citadel and other archeological finds from this era.

Near Dogubeyazit, the graceful Ishak Pasha Palace is magnificent from its hilltop plateau vantage point on an otherwise barren landscape. Built in the 17th century, its harem, colonnaded dining hall and courtyards have an unusual mix of architectural styles borrowed from those of Persian, Armenian, Ottoman and Selcuk design.

Sanliurfa has long been a place of pilgrimage as the birthplace of Abraham over its 9000 year old history, and the focus is the central carp-laden lake surrounded by the beautiful arches of the Halil Rahman and Rizvaniye Mosques. Nearby, there are amazing historical sites such as the tumulus, fortress and unusual bee-hive village huts in Harran.

The ancient city of Zeugma on the River Euphrates has been described in international literature as the ‘second Pompeii’, as it was discovered under the rubble of an earthquake 2000 year old earthquake. The outstanding archeological exhibits at the Zeugma Mosaics Museum in Gaziantep display the extent of the wealth the people enjoyed with houses adorned with the world’s loveliest mosaics, ceramics, statues, and frescos.

Simply email us your dates of travel, number of adults/children and requirements to receive a suggested itinerary and price within 1 business day.

Simply email us your dates of travel, number of adults/children and requirements to receive a suggested itinerary and price within 1 business day.

Winner of Trip Advisor's Certificate of Excellence multiple years in a row.