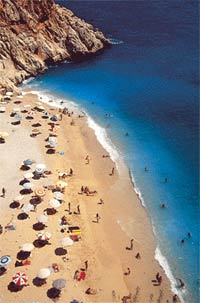 Statue in Library of Celsus, Ephesus

The Turkish Aegean Coast is crisscrossed with ruins of a multitude of Greco-Roman ancient cities and temples, fishing villages with seaside tavernas, natural parks, spas and thermal springs, as well as many pleasant coastal resorts for relaxing by the turquoise sea. In particular, the beautiful white marbled ruins of Ephesus is one of the world’s grandest and still most intact Greco Roman city…

The main spotlight of the Aegean falls deservedly on the white marbled ancient city of Ephesus, unsurpassed as the most well preserved and expansive ancient city in the whole country. Superbly restored, the marble paved road leads past the 2 story ornate colonnaded Celsus Library, Hadrian’s Temple, the stadium and many other fascinating archeological monuments.

Probably the most beautiful ancient city ruins in the region are those of Aphrodisias, where a dedicated cult to the Goddess of Love flourished in arts and philosophy in 1AD. There are astonishing details in the blue-grey delicately cut marbled sculptures, reliefs and friezes in the onsite museum, while the spectacular hilltop standing columns of the Temple of Aphrodite and stadium of ancient gladiator competitions will not fail to cause amaze. 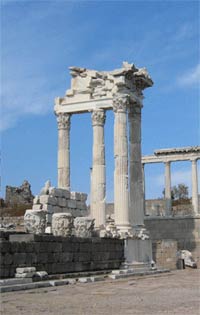 Years of cascading mineral water from natural hot springs over the high cliff-face at Pamukkale have created an unusual series of snow white terraced salt basins against the hillside, from which color it is named ‘the Cotton Castle’. Stalactites, small travertines, waterfalls and paddling pools coupled with the nearby ancient ruins of the Roman thermal spa, baths and temples of Hieropolis make for interesting exploration.

The large coastal Bodrum Peninsula presents many opportunities for the weary traveler to relax away from the crowds in the quiet environs of small picturesque whitewashed towns and traditional villages. There are paradisiacal stretches of sandy beach, turquoise bays and unspoiled natural scenery to enjoy water sports sunbathing and swimming.

Other ancient cities in the region include Priene Miletus, Didyma and as well as the biblical sites of the Seven Churches of the Revelation can be found at Pergamon – Thyatira – Smyrna (Izmir) – Sardis – Philadelphia – Laodicea and Ephesus in and around the Izmir region.

Ask a Question / Get a Quote

Contact us now for quotes, questions or reservations. Simply email us your dates of travel, number of adults/children and requirements to receive a suggested itinerary and price within 1 business day.

Email us a Question


Simply email us your dates of travel, number of adults/children and requirements to receive a suggested itinerary and price within 1 business day.

Winner of Certificate of Excellence 2012-2016 from TripAdvisor: